Governor Newsom has made several appointments to state agencies and departments that are relevant to the agricultural and water issues that impact Westlands. In addition, important changes have taken place at the federal level. The section below provides background information on the appointees that will head these key environmental, resources and agricultural agencies.

Established in 1919, the CDFA’s mission has been to “promote and protect a safe, healthy food supply, local and global agricultural trade, and environmental stewardship.” Secretary Ross served as CDFA Secretary under Governor Jerry Brown for eight years and has been re-appointed by Governor Newsom. Secretary Ross and her husband own an 800-acre farm, where her family grows dryland wheat and feed grains and raise cattle.

Established in 1991, CalEPA’s mission is to “restore, protect and enhance the environment and to ensure public health, environmental quality and economic vitality.” Blumenfeld most recently served as Regional Administrator of the United States EPA for the Pacific Southwest which includes California. Prior to his work at the federal level, Blumenfeld was the Director of the San Francisco Department of Environment where he served under Mayor of San Francisco Newsom.

The CNRA’s mission is to “restore, protect and manage the state’s natural, historical and cultural resources for current and future generations using creative approaches and solutions based on science, collaboration and respect for all the communities and interests involved.” Crowfoot is the former Chief Executive Officer of the Water Foundation and served the previous administration as senior advisor and deputy cabinet official and deputy director of the governor’s Office of Planning and Research. In addition, Crowfoot is the former West Coast regional director for the Environmental Defense Fund and served as senior advisor on environmental policy to Mayor of San Francisco Newsom.

The Natural Resources Agency oversees several other departments including, Conservation, the CALFED Bay-Delta Program, Fish and Wildlife, and Water Resources.

Bureau of Reclamation. At the federal level, the United States Bureau of Reclamation recently named Ernest A. Conant as Mid-Pacific Regional Director. Conant will be responsible for administering Reclamations’ mission of managing, developing, and protecting water and related resources for the Mid-Atlantic Region, which includes California. In his role, Conant will be responsible for managing the Central Valley Project, which supplies water to major urban centers in the Greater Sacramento and San Francisco Bay areas, and farms throughout the San Joaquin Valley.

More on Ernest A. Conant here. 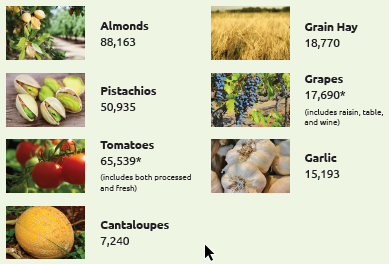 Westlands was pleased to be a part of the 2019 World Ag Expo this month in Tulare. This was the second year that Westlands held an information booth at the annual event, which features seminars, farm equipment, ag technology and delicious food. Over the three-day event, District staff had the opportunity to educate attendees and exhibitors on the importance of a reliable agricultural water allocation, the nexus between agricultural production and economic success, irrigation efficiencies, and current water supply challenges.

Article Source - Sacramento Bee: In the wake of the storms that have blanketed much of California this February, The U.S. Drought Monitor said Thursday that just over 67 percent of the state is totally free of any level of dryness.