Op-Ed: Plentiful rain and snow, but westside growers get shortchanged on water supply

Since its formation in 1952, the mission of the Westlands Water District has been to provide timely, reliable and affordable water services to landowners and water users in western Fresno and Kings Counties.

In order to further its mission, Westlands must shine a light on failed policies that impact the delivery of water to the District. Existing policies intended to protect fish have failed. Many fish species have declined. And, those failed policies hurt agricultural, urban and wildlife communities.

For instance, last month, the U.S. Bureau of Reclamation announced an initial water supply allocation of 35% for Westlands and other south-of-Delta agricultural water service contract holders. To illustrate the impact of the failed policies, Jose Gutierrez penned an opinion editorial. In the time since the editorial ran, the U.S. Bureau of Reclamation increased that allocation to 55%.

Plentiful rain and snow, but westside growers get shortchanged on water supply

BY Jose Gutierrez
MARCH 08, 2019
Published in the Fresno Bee

But still, on Feb. 20, the U.S. Bureau of Reclamation announced that south-of-Delta farmers who rely on CVP water to irrigate their crops would receive only 35 percent of their contract supplies. Many farmers, water agencies, and members of Congress asked, how could this be? The answer is simple: rigid regulatory constraints imposed on operations of the CVP prevented Reclamation from making a common-sense water management decision. These are the same constraints that have handcuffed the water delivery system since 2008.

This year the operational constraints that prevented Reclamation from allocating more water to south-of-Delta farmers were imposed by the 2009 biological opinion issued by the National Marine Fisheries Service to protect anadromous fish. Despite storage in Shasta Lake that on Feb. 19 was 104 percent of the long-term average, biologists at NMFS insisted that Reclamation reduce allocations so Shasta Lake, based on a conservative forecast that assumed dry conditions for the remainder of the year, would have sufficient water in storage to create a cold-water pool to protect spawning salmon in the Sacramento River below Shasta Dam. Forecasted operations of Shasta were so conservative that Reclamation projected end of September 2019 storage in Shasta Lake would be 2.65 million acre-feet. This is 750 thousand acre-feet more than the minimum level for end-of-September Shasta storage prescribed by the NMFS biological opinion.

As the water year progresses, the allocation for farmers south of the Delta will undoubtedly increase. But uncertainty about how much water Reclamation will ultimately allocate makes it nearly impossible for farmers to efficiently plan their farming operations. Without knowing how much water Reclamation will make available, farmers must gamble when deciding whether to plant a field or deciding which crop to plant. In addition, low initial allocations result in farmers pumping more groundwater from an overtaxed groundwater basin early in the growing season. Any water manager will tell you that sound principles of conjunctive use demand that when surface water is plentiful, farmers should rely on surface water, rather than groundwater. But even in wet years, like this one, if Reclamation cannot allocate surface water because of unreasonable constraints imposed on operations of its largest reservoir, farmers will continue to overpump from the groundwater basin.

The low initial allocation, in a year that in mid-February was on course to end with precipitation and runoff that is well above average, is further evidence that California’s water system is not working. Fortunately, both the federal and state governments recognize this fact. Reclamation, working with the United States Fish & Wildlife Service, NMFS, the California Department of Water Resources and the California Department of Fish and Wildlife, are reevaluating constraints imposed by the existing biological opinions and are asking, is there a smarter way to protect fish and supply water? Rather than focusing entirely on controlling one factor, operations of the CVP and State Water Project, these agencies are developing actions that will address numerous other factors, including loss of spawning and rearing habitat, predation, unscreened diversions, and water quality, that limit the abundance of Delta smelt and anadromous fish. And Reclamation is exploring with NMFS better ways to manage cold water pools in reservoirs to protect spawning salmon below Reclamation’s dams. These efforts and potential changes to CVP and SWP operations will be based on science and real-time monitoring, rather than arbitrary dates on a calendar or quantities of water.

Unlike the current situation, the new approaches to protecting and enhancing fish abundance will address the many factors that limit fish and have the greater potential of accomplishing their intended purpose than focusing only on flow alone. And the new approaches being evaluated have the potential of restoring water supply and reliability to farmers, businesses, and residents in virtually every region of the state. The new approaches have the potential of creating a well-functioning water system, with the flexibility to provide supply during periods of abundance while protecting fish populations through better science and management actions.

In the short-term, because of wet hydrologic conditions, the allocation for farmers served by the CVP will increase. But in the long-term, we must find better ways of managing the system, to provide better protection for fish and wildlife and an adequate, more reliable supply of water for people. All water users, farmers, cities, and the environment, will benefit from the ongoing efforts of federal and state agencies to address one of the most important policy issues facing the state.

Jose Gutierrez is a registered civil engineer and is the chief operating officer of Westlands Water District.

Have you seen our newest video?

Westlands recently released the second in a series of videos that highlight why a reliable water supply is important, not just for farmers in the San Joaquin Valley, but also for those who rely on a healthy farm economy. Check out the video and learn about the important role the District plays in the global food supply chain.

Westlands Water District is once again pleased to offer an annual scholarship program that recognizes and rewards college-bound seniors who have shown exceptional academic achievement and leadership. Scholarships are awarded to students from the following west side high schools: Coalinga, Firebaugh, Lemoore, Mendota, Riverdale and Tranquillity. Applications and all supporting documents are due in the Westlands Water District Office by May 10, 2019. Each winner receives a $1,000 scholarship award. For an application and list of instructions, please contact the public affairs office at (559) 241-6233 or visit. 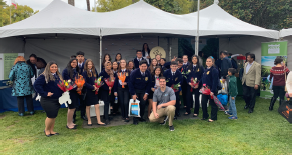 Ag Day at the State Capitol

On March 20th, Westlands participated in Ag Day at the State Capitol in Sacramento. Westlands staff hosted a booth at which it provided information regarding the importance of a reliable agricultural water allocation, provided awareness of how much water is needed to enable farmers to produce the food we eat, irrigation efficiencies, and the current water supply challenges farmers face. Westlands was also pleased to sponsor lunches for FFA students who had traveled to Sacramento for Ag Day. In addition, District staff held an information booth at the Kings County Farm Day on March 14th, 2019.

Article Source - Maven's Notebook: On the heels of an initial water supply allocation of 35%, south-of-Delta ag contractors increased to 55%.