The Bureau of Reclamation (Reclamation) was very busy at the beginning of 2020. In February alone, Reclamation signed the Record of Decision on the Long-Term Operations of the Central Valley Project (CVP) and State Water Project (SWP), announced the initial allocation for Central Valley Project contractors, and converted eight (8) water service contracts to repayment contracts, one of which was the District’s contract.

On February 25, 2020, citing a lack of precipitation in the early months of 2020 as a significant factor, Reclamation announced an initial allocation of 15% for South-of-Delta agricultural water service contractors. A statement issued by Westlands Water District noted that, although it wished the initial allocation were higher,  “Reclamation cannot allocate water that its operations forecast indicates will not be available.”

Despite a promising start to the 2019 - 2020 hydrologic year, January and February were drier than average, with February classifying as the driest on record. Reclamation supported its initial allocation announcement based on its February 1 hydrologic conditions forecast; at that time, the accumulated precipitation was 62% of average.  Ultimately accumulated precipitation slipped to 52% by the February 25 announcement. In addition to scarce precipitation, low San Luis Reservoir storage conditions, and lower than average snow water content contributed to the 15% allocation.

Despite the early dry conditions, hydrologic conditions recently have improved and new operations for the CVP, discussed below, provide some hope that allocations will increase in May.

The Record of Decision (ROD) for CVP and SWP Operations was signed into effect on February 19, 2020. A statement issued by Reclamation cites that the updated operations approved through the ROD will “bring added operational flexibility, which will enhance water reliability throughout the [CVP] system. For example, by incorporating real-time monitoring into the CVP, the ROD enables better decision making and flexibilities to quickly respond to agricultural, environmental and endangered species conditions.”  The District estimates that, if the operations approved through the ROD were in effect in 2019, the CVP and SWP would have had been able to move an additional one-million acre feet of water. That is enough water to irrigate 300,000 acres of land or serve more than 2 million households.

The WIIN Act was signed by President Barak Obama in 2016, as part of a larger water package, with the purpose of improving water infrastructure especially in the western United States. President Obama noted that the WIIN Act is intended to help meet California’s long-term water needs by helping to “assure that California is more resilient in the face of growing water demands and drought-based uncertainty.”

The full statement from Westlands Water District about the contract conversion can be found here.

Several updates occurred in the beginning of 2020 which effected the District, and water overall, in California, for updates in real time regarding news impacting the District and its activities, follow us on social media.

Considering the recent developments related to the COVID-19 pandemic and to reduce the risk of the virus to District staff and members of the public, the District requests all communications to staff be made via phone or e-mail. The District’s Fresno and Five Points phone lines will remain open during regular business hours. Please follow our social channels for more regular updates. You may contact the main office by phone: (559) 224-1523, or email: info@wwd.ca.gov. Read our full statement here.

The District is again pleased to offer an annual scholarship program that recognizes and rewards college-bound seniors who have shown exceptional academic achievement and leadership. Scholarships are awarded to students from the following westside high schools: Coalinga, Firebaugh, Lemoore, Mendota, Riverdale and Tranquillity. Each winner receives a $1,000 scholarship award. Applications and all supporting documents are due to Westlands Fresno office by May 8, 2020. Instructions on the application process are available on the scholarship webpage or by contacting the public affairs office at (559) 224-1523. 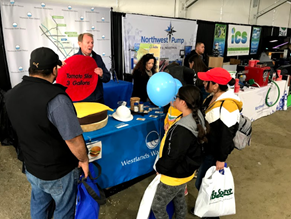 In February, the District hosted an information booth at the World Ag Expo in Tulare.  The three-day event featured seminars, farm equipment, ag technology and delicious food. District staff valued the opportunity to educate attendees and exhibitors on the importance of a reliable agricultural water allocation, the nexus between agricultural production and economic success, irrigation efficiencies, and current water supply challenges.

In January, the District held a workshop focused on implementation of the ASR program.  The workshop provided an opportunity to ask the District’s technical experts questions about the program. For more information regarding this workshop, please contact Kiti Campbell at 559-241-6226 or kcampbell@wwd.ca.gov.

Gov. Newsom: California must get past differences on water. Voluntary agreements are the path forward

Commentary: Newsom's Water Framework Is Imperfect but Necessary. The Alternative Is Further Deterioration of the Delta

Article Source - Public Policy Institute of California (PPIC): Following the release of the Newsom administration’s proposed framework for the Voluntary Agreements, the PPIC provided commentary that the proposed framework makes an earnest attempt to take a broader approach at addressing California’s water needs and policies.