The countdown has begun.

Westlands Water District (Westlands) serves as the GSA of the Westside Subbasin. It is one of the state’s initial 260 GSAs formed in over 140 basins. DWR designated the Westside Subbasin as a high priority basin, determined the Subbain was in critical overdraft, and concluded the Subbasin suffered from reduced groundwater storage, degraded quality of water, land subsidence, and low groundwater levels.

On September 16, 2014, Former Governor Jerry Brown signed into law a set of bills that are now commonly referred to as the Sustainable Groundwater Management Act (SGMA) –pronounced “sig-ma.” SGMA created a comprehensive program to stabilize groundwater supply in California and protect the structural integrity and available capacity of the state’s numerous underground aquifers.

SGMA is intended to empower local agencies to halt overdraft and bring groundwater basins into balance. To accomplish that, SGMA called for the creation of GSAs, which have the responsibility of developing GSPs, which must outline how groundwater will be sustainably managed, how overdraft will be prevented, and how the GSA will ensure the long-term reliable use of groundwater, generally by the year 2040.

Westlands as a GSA – Outreach and Information Development

Westlands, serving as the GSA for the Westside Subbasin, is preparing to adopt its GSP by January 2020. As part of that process, Westlands has hosted 15 public outreach events to obtain input from and collaborate with its water users, neighboring water agencies and GSAs, community members, and other interested people on Westlands’ ongoing SGMA activities, including the development of the GSP.

A critical foundation for the GSP is a groundwater model for the Westside Subbasin. Westlands developed the model and calibrated it using historical groundwater usage data for the period 1988 to 2015 [view below]. The model simulates groundwater supply and elevation levels with different climate change scenarios, future recharge projects, hydrogeology (natural movement of water) and land use conditions.

In its history, Westlands has actively developed and implemented innovative methods to improve efficient use of the state’s precious water resources. In its effort to implement SGMA, Westlands is taking progressive steps in researching projects that may support the GSP.

For example, the District is studying the potential for aquifer storage and recovery (ASR). ASR would allow injection of surface water into the Subbasin during surplus water years – to serve as a savings account – which can be used during the dry years without frustrating the purposes of SGMA. Westlands conducted an ASR pilot project in 2017 and is completing environmental review of a long-term program, so that, if approved, ASR can be implemented as soon as the GSP is adopted. In addition, Westlands is evaluating “in lieu” recharge programs, to encourage farmers to use surface water when it is available for irrigation, in lieu of pumping groundwater. 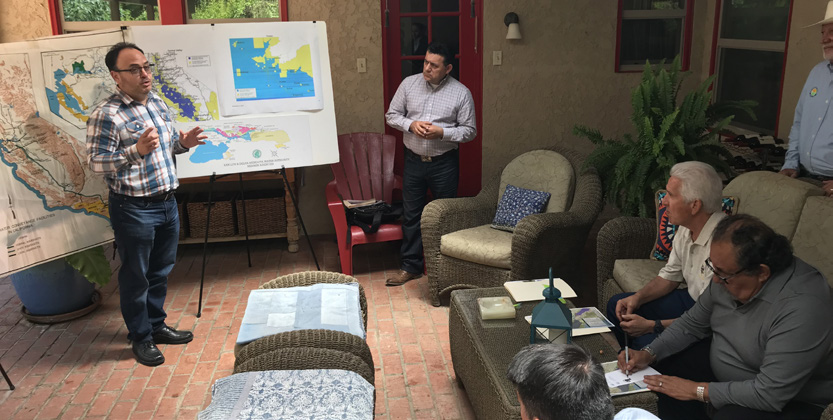 The Congressmen started their day with a tour of Del Bosque Farms, north of the District, then attended a lunch with elected official from disadvantaged communities in the San Joaquin Valley and ended their day meeting representatives of the District and other local public water agencies. The tours and meetings were focuses on the importance of a reliable water supply, water infrastructure, and local partnerships.

Westlands values these opportunities, which allow the District to highlight the challenges faced by Central Valley farmers as they continue to feed the world.

Westlands awarded scholarships to six high school seniors in recognition of the students’ exceptional academic achievement. The recipients, each of whom are from west-side communities, will receive $1,000 towards their community college or university expenses. Applicants were judged on their academic performance, school activities, community leadership and an essay on an agricultural-related topic.

The recipients of the 2019 scholarships are:

Westlands is honored to recognize and assist these outstanding students. “These scholarships represent a small gesture of thanks and support to the communities on the west-side of the San Joaquin Valley that make our region productive and vibrant,” said Tom Birmingham, general manager of Westlands. “Our hope is that these students will continue to contribute to their communities and make them even better for future generations.”

The U.S. Bureau of Reclamation recently announced that the Central Valley Project (CVP) allocation for south-of-Delta agricultural water service contractors increased to 75 percent. The District supports the increase but, given current conditions, had hoped for higher allocation.

A Rainfall Year in Review: How has Water Shaped up for Sacramento and Northern California

Article Source - Sacramento Bee: With the 2018-2019 precipitation year ending this month, the Sacramento Bee takes a look back at the record-breaking rainfall, above-average snowpack, and near-full reservoirs that marked the water year.

California Snowpack 202% of Average for this Time of Year