Common Ground for the Common Good

As part of our mission to provide a timely, reliable and affordable water supply to landowners and water users in the District, Westlands staff often works closely with our neighbors to achieve outcomes that help water users not just in Westlands, but throughout the state.

This month the partnerships that we have developed paved the way for a monumental, generational shift that will improve the ability to meet the water needs for humans and the environment.

The press release below outlines the major agreement reached earlier this month.

FRESNO, CA – Today the United States Bureau of Reclamation and the California Department of Water Resources announced a series of agreements to resolve water conflicts that have vexed the State for decades and to reaffirm the collaborative partnership between the Federal and State governments to develop longterm solutions to California’s major water problems.

Since August 2018, Reclamation and DWR, with support from public water agencies from nearly every region of the State, have engaged in accentuated discussions to address contributions from the Central Valley Project, the State Water Project, and the public water agencies they serve to voluntary agreements to resolve conflicts over proposed amendments to the Bay-Delta Water Quality Control Plan Update and to revise sharing formulas under the 1986 Coordinated Operations Agreement.

The product of those discussions includes a series of voluntary agreements to resolve conflicts over proposed amendments to the Bay-Delta Water Quality Control Plan Update that, if accepted by the State Water Resources Control Board, will provide:

These agreements will result in immediate improvements to the environment and at-risk aquatic species and commit local, regional, Federal and State agencies to a long-term course for collaboration to further ecosystem enhancement and water supply improvements.

Today’s announcement is a paradigm shift in how water will be managed for human and environmental needs and how decisions will be made about the use of the State’s most precious resource. It is a good deal for the State and the Nation.

Westlands was pleased to be a part of Valley’s Gold Season 5 episode, “Broccoli and Cauliflower.” Westlands is always proud to share the productive farms that make up the District as well as the sustainable water efficient technology used throughout the farms. Click here to watch the episode.

The Central Valley Water Board has released proposed revisions to the Waste Discharge Requirements General Order R5-2014-001 For Growers Within the Western Tulare Lake Basin Area That Are Members of a Third-Party Group (General Order). A public hearing will be held on February 7 and 8, 2019 in Rancho Cordova. Members are encouraged to review revisions and provide comments by 5:00 p.m. on December 21, 2018. If you have questions on the General Order revisions, please contact Debra Dunn at 559-241-6242 or ddunn@westlandswater.org. 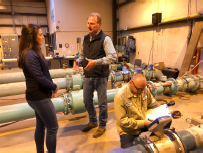 The Westlands Water District is pleased to announce the selection of Diana Giraldo for the position Public Affairs Representative. Ms. Giraldo brings to the District a wealth of experience to help handle the many issues the farmers and people of the District face every day. Prior to joining the District, Ms. Giraldo was employed by the Fresno Chamber of Commerce, where she served as a communications specialist.

SF, OTHER CITIES CONSIDER LAWSUITS TO HEAD OFF WATER RESTRICTIONS

Article Source - SF Chronicle: This month, a decision by the State Water Board imposed stiff reduction demands on water users that rely on the San Joaquin River. In response, San Francisco officials are looking at the possibility of lawsuits.